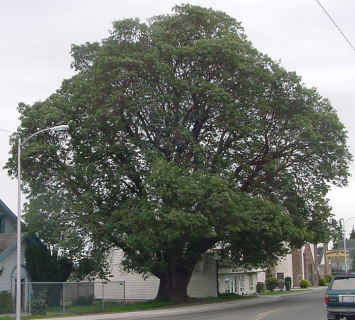 The "Port Angeles Madrona" is the largest healthy Madrona Tree (Arbutus menziesii) in the State of Washington. It stands on a single city lot in a commercial district of the city. It stands 85 feet tall, with an impressive crown spread of 95 feet and trunk circumference of 21 feet 5inches. The tree's well being first became a cause of concern to me back in 1990/1991 when an office building was constructed on a previously vacant next-door lot. The building was constructed absolutely as close as was possible to the Madrona, and in fact, part of this building is within the dripline of the tree. It is highly improbable that the tree was not impacted by this activity, not only by root loss but also leaching of water from cement being used for the construction. The leachate from the cement would locally raise the Ph. of the soil considerably, creating a very hostile environment for development of new roots in that area.

The lot on which the tree grows had an old, dilapidated house on it, which was being used as a ceramics studio. It was apparent to me that the development of the lot next door could signal the start of further development in the area. I learned that there was absolutely nothing in place to protect this tree in anyway, and here it was growing in a city of many arborphobes where the local council seemed to take no interest in trees, other than sending logging crews into local, forested parks and extracting merchantable timber.

The Madrona and its well being mattered to me and I was determined to do whatever I could to preserve this tree. Through help received from a number of groups including "Plant Amnesty" and many members of the " Pacific Northwest Chapter of The International Society of Arboriculture" along with a multitude of others (please see acknowledgements below), it became possible to raise public awareness of the plight of the tree. Articles were submitted to newspapers, television stations, radio stations and green trade business publications.

My plan at that time was to beg and solicit donations to a fund with the intention of purchasing the lot and then donating it as a park to people of the City of Port Angeles. Response was slow due to the difficulty of reaching enough people and while a couple of thousand dollars were raised, interest began to wane, then the situation appeared to stagnate for a few years where precious little happened. In retrospect I realize that while nothing positive was happening, nothing negative was happening either, I believe we had elevated awareness enough locally that no one really wanted to deal with what might have happened if the tree was threatened in anyway.

Finally in the fall of 1999 a very fine lady in the area purchased the tree and the lot with the intent of turning it into a park as a memorial to her deceased, beloved husband. Interestingly, despite the awareness of many of the local people of my concerns and efforts on the part of the tree no mention was made to her about this. I find it virtually impossible to believe the local real estate agents were unaware of this. I became aware of the change of ownership as a result of a personal conversation between a local county official and my wife. I immediately contacted the new owner and introduced myself to her, arranging a meeting at the tree at the earliest opportunity. On our initial meeting, I think there was some hesitation on both our parts about what the other's intentions were, though as we met and discussed the tree further and I showed her documentation of my efforts she was prepared to trust me with the care of her tree, I felt very honored by that. Unfortunately during this time she had arranged for the removal of the old building behind the tree, which was undertaken with a large excavator raising further concerns on my part, of further root damage. The area around the tree had also been mulched down with some material from the local landfill, given away for free and appearing to contain a high percentage of shredded, black plastic trash bags, when this material came into contact with rain puddles on the site oil sheen would immediately appear.

Interestingly, during conversation with her I learned a lot more of local attitudes toward the tree and general levels of local arboricultural knowledge. The new owner had offered the park to the City of Port Angeles, which they refused. She had also talked to a Forestry Professor about a disease problem in the tree, which he recommended be "treated" by severely cutting back the canopy. The most prominent diseases in the tree being Madrona Canker (Fusicoccum aesculi)  and (Botryosphaeria dothidia) which are both wound parasites, would have made any pruning operation exceedingly damaging. Fortunately my recommendations sounded more reasonable to her and she accepted my recommendations.

Since that time I and a number of volunteers have removed 40 cubic yards of inappropriate mulch by hand and replaced it with a 1.5 inch layer of clean, organic, composted horse manure and woodchips. The soil on the entire site was then inoculated with Mycorrhizal fungi and a four-inch thick layer of Douglas fir woodchips was put down as mulch. We are hoping to plant around the tree with native plant material, which would be found in a natural Douglas Fir/Madrona forest system.

The very latest development has been the removal of the sidewalk, which was within 18 inches of the tree trunk; the sidewalk has been rerouted out into the street where previously the area had been used for parking cars.

I would like to express my heartfelt gratitude to all those people who helped and donated to this cause, especially my family and close friends who encouraged me and tolerated me during the more manic episodes. It would be impossible for me to list all of the people who gave their support but feel the following deserve special mention:

Many thanks to all those people who were responsible for me winning the following awards, in large part for this endeavor. 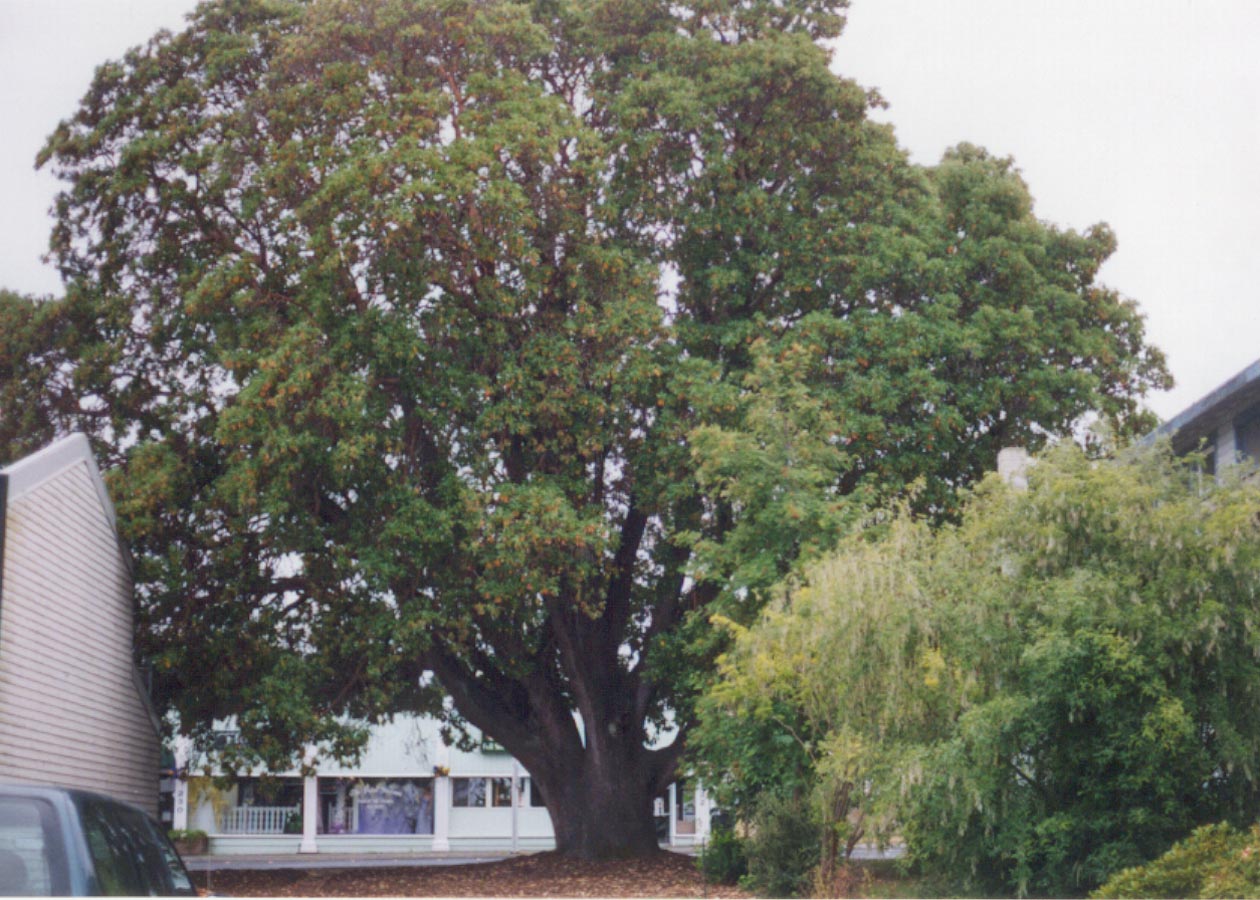